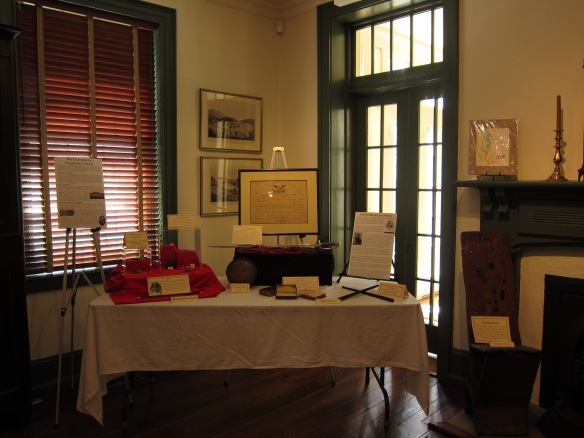 Did you know that the Greenbrier Valley was a strategic military location during the Civil War? Or that Greenbrier County was a major supplier of Salt Peter which is used in the manufacture of gunpowder? In honor of the Sesquicentennial, the Greenbrier Historical Society created a display discussing the Civil War in Greenbrier County, featuring a sabre used at the Battle of Lewisburg, a chair from a civil war encampment, and personal items from local men who fought for the Confederate army.

We invite everyone to visit the Greenbrier Historical Society’s North House Museum, located at 301 W. Washington Street, Monday – Saturday from 10am to 4pm. For more information, contact 304.645.3398 or info@greenbrierhistorical.org. 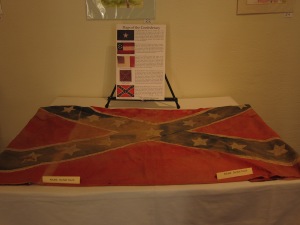 Item of the Week: Greenbrier County Land Warrant Entry Book
The archivists at the Greenbrier Historical Society are currently preserving the original Greenbrier County land warrant entry book.  Ranging from 1780 to 1839,  the book contains over 700 pages of land surveys. The goal is to make this resource available to researchers. 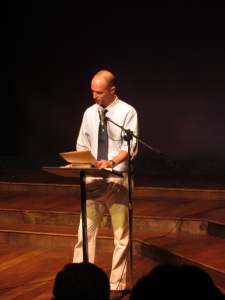 The Greenbrier Historical Society and Greenbrier Valley Theatre would just like to thank everyone who attended our sesquicentennial event “150 Years of Stereotypes: Exploring West Virginia in Literature and History!” We were fortunate to have two authors – Glenn Taylor and David Corbin – join us for what we thought was a good evening.

As always, we would love to hear what you thought of the event! Please take a short survey to help us better plan future programs and events or respond directly to this post: http://www.surveymonkey.com/s/MHRNKV7

The Greenbrier Historical Society & North House Museum is pleased to host local artwork painted by the very talented Greenbrier Artists. The show, titled “Images of the North House,” is a collection of 28 paintings and sketches completed during their Plein Air Weekend, and will run from Friday June 22 to Monday July 8, 2013.

Don’t forget to stop by the North House Monday-Saturday from 10am to 4pm to see this great show before it ends on July 8th!

In the spirit of preserving 150 years of natural beauty and cultural identity, we are sharing the following Call to Action from the Birth Place of Rivers National Monument initiative.

“Covered from end to end, and on all sides, by the ancient Appalachian Mountains, West Virginia is exquisite in its natural splendor. It is the most southern of the northern; the most northern of the southern; the most eastern of the western; and the most western of the eastern States. It is where the east says “good morning” to the west, and where Yankee Doodle and Dixie kiss each other goodnight.” – Senator Robert C. Byrd

Take action to help create West Virginia’s only national monument!
The Birthplace of Rivers National Monument would forever preserve a recreationally, ecologically and culturally significant landscape in the southern Monongahela National Forest, known to many West Virginians as the “Mon”.  The proposed national monument would protect special features such as the Cranberry Backcountry, Tea Creek, Falls of Hills Creek, Cranberry Glades and critical headwaters of six trout-rich rivers.  This area means so much to local communities and the Mountain State as a whole, but without a more permanent protective status, the Mon’s natural treasures are not guaranteed to remain as Wild and Wonderful as they are today.  Unless protected by law, future management of certain public lands could change in favor of increased industrial development, forever altering the way West Virginians and our visitors enjoy the southern Mon.

As we celebrate 150 years of statehood, West Virginia’s congressional leaders have an opportunity to set aside some of the most special wild places in the southern Mon for future generations, honoring a rich mountain culture deeply connected to the land.  The proposed Birthplace of Rivers National Monument is a balanced approach to protecting and restoring wild forests and coldwater streams, preserving our heritage and providing for a more sustainable economic future.  This West Virginia Day, sportsmen, mountain bikers, business owners, conservationists, religious groups and local community leaders are coming together to ensure the exploration and enjoyment of this Wild and Wonderful land for many generations to come.

Let’s make the Birthplace of Rivers National Monument a reality!

Take Action!
Tell Senators Manchin and Rockefeller to honor the Mountain State by supporting the Birthplace of Rivers National Monument!   Let our Senate leaders know why protecting the southern Monongahela National Forest is important to you.

Birthplace of Rivers National Monument – Our Heritage, Our Future
Get involved, learn more, connect with the citizen campaign:  www.birthplaceofrivers.org 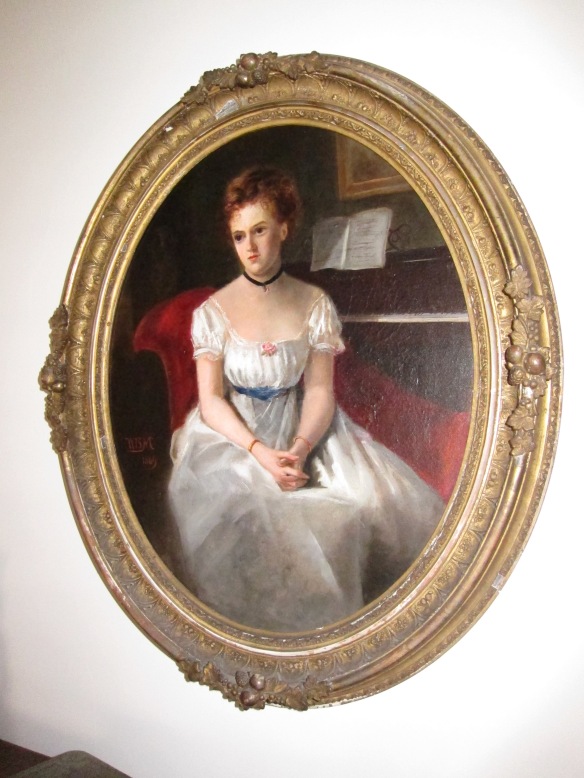 ITEM OF THE WEEK: 1869 portrait of Mattie Ould.
Mattie was chosen as Belle of the Old White Resort because of her outstanding beauty, charm and wit.  But her story has a tragic ending.  Mattie eloped with a penniless Richmond artist that her father did not approve of.  Her father disowned her and she died in childbirth shortly after.  She begged to see her father one last time, but he refused and she died without his forgiveness.  This hauntingly beautiful portrait is on display at the North House Museum

This week’s Item of the Week comes to us from the Collections Room.

This image of Weyers Cave in Augusta County, Virginia is a lithograph by Edward Beyer from 1858.  Beyer was a German artist who traveled through western Virginia painting many beautiful landscapes. He eventually had his paintings made into lithographs that were bound and sold as the Album of Virginia.

Many of Beyer’s lithographs can be found on display at the North House Museum.

Beyond The North House Tour
Create a free website or blog at WordPress.com.