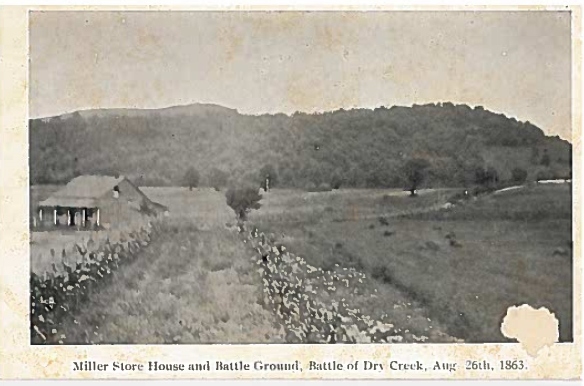 Union troops under General William W. Averill were marching from Covington, Virginia by way of the James River and Kanawha Turnpike with the purpose of capturing the law library in Lewisburg. Believing that Averill’s target was the Virginia and Tennessee Railroad, members of the Confederate army under Colonel George Patton and Colonel George Edgar marched down Anthony’s Creek Road toward the junction of the James River and Kanawha Turnpike. Determined to head off the Union army, Patton’s army marched for nearly 24 hours. Col. Edgar ordered his men to tear down a split-rail fence and create a barricade. Even so, the bodies of dead and wounded soldiers quickly filled the road. At the end of the first day, the two armies rested barely 300 yards apart. Fighting renewed the next morning with Averill ordering a retreat to Beverly. The Union army suffered approximately 218 casualties while the Confederates lost approximately 167 men. Wounded soldiers were treated at the Old White Hotel at White Sulphur Springs.

A historic Marker commemorating the battle now stands at the intersection of Route 92 and US Route 60 – yards from where the fighting took place.

The 25th Annual Battle of Dry Creek Re-Enactment will be held this Saturday and Sunday August 17th and 18th, 2013 in the Greenbrier State Forest. There will be a Saturday morning tactical at the park and a live artillery demonstrations at 1:30pm. On Sunday at 2pm, the Battle of Dry Creek will be held. There is no charge and the public is invited to come out and enjoy the day. For more information on this event, go to battleofdrycreek.org.