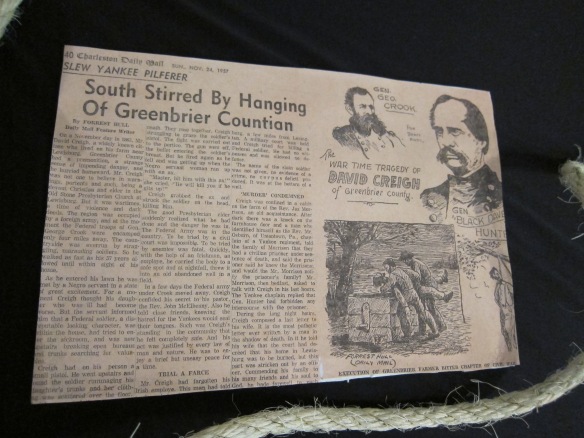 This article and cartoon, printed in the Charleston Daily Mail on November 24, 1957, discusses the trial and death of David S. Creigh, the Greenbrier Martyr. Newspapers can often tell us a lot about the subject of the article as well as the time period in which the article was printed.

In November 1863, Creigh, a popular Lewisburg resident, fought and killed a Union soldier who was caught breaking his home and harassing his wife. Knowing that the Union commanders would not listen to his story, Creigh hid the body in an old dry well on his property. Unfortunately, the story spread and Creigh was arrested, sentenced to death, and hung outside of Brownsburg, Virginia.

The death of David Creigh is just one of the stories that will be told at the Haunted History event on Friday October 4th and 18th from 5-7pm.

Join the Greenbrier Historical Society, Greenbrier Valley Theatre, and Carnegie Hall for a series of special programming and events from June 16 to June 21, 2013!

150 Years of Stereotypes: Exploring West Virginia in Literature and History

Civil War Artifacts On Display
As West Virginians, this year celebrates not only the 150th anniversary of the American Civil War, but also 150 years of statehood. The Greenbrier Historical Society will be hosting a traveling exhibit Born of the Rebellion: West Virginia Statehood from July 15th to August 9th. Until then, GHS will have a number of Civil War artifacts on-display in the North House Museum to celebrate the Greenbrier Valley’s role in the conflict that ultimately brought about statehood.