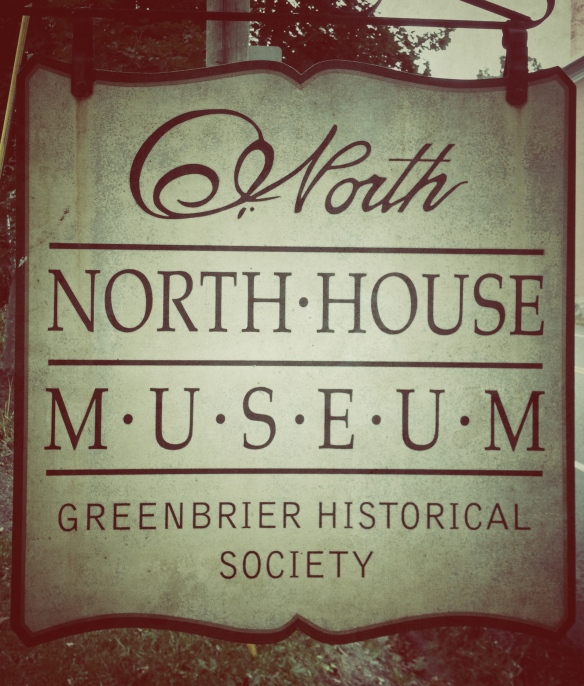 Join the Greenbrier Historical Society on October’s First Friday in Downtown Lewisburg for a haunted candlelit tour of the North House. For two nights only – Friday October 4th and Friday October 18th, 2013 from 5pm to 7pm – the historical society will open its doors for an evening of thrills, chills, and fall fun. The North House will once again be visited by a number of spirits who are yearning to tell our guests their tragic stories.  Come walk the darkened hallways, listen for unexplained footsteps, and prepare yourself for ghostly images.

Tours will begin every 30 minutes with a limited number of tickets for each tour. The admission fee will be “Pay What You Can” and will go to support the Greenbrier Historical Society and North House Museum.  If you have any questions or require more information, please call 304-645-3398 or email info@greenbrierhistorical.org.

Item of the Week – September 6, 2013
This small flax spinning wheel, currently on display at the North House Museum, was once owned by Elizabeth Coffman Rodgers. Elizabeth was born in 1815 on Davis Stuart Road near Lewisburg, in what was at that time the Commonwealth of Virginia. Elizabeth grew up learning the crafts of spinning, dyeing and weaving from family members. She even made a living selling her distinctive bed coverings long before she married at the age of 29.

Elizabeth was quite a prolific coverlet maker at a time when only men were expected to be professional weavers. Many examples of her work are to be found around the Greenbrier area and the Greenbrier Historical Society has six in its collection. 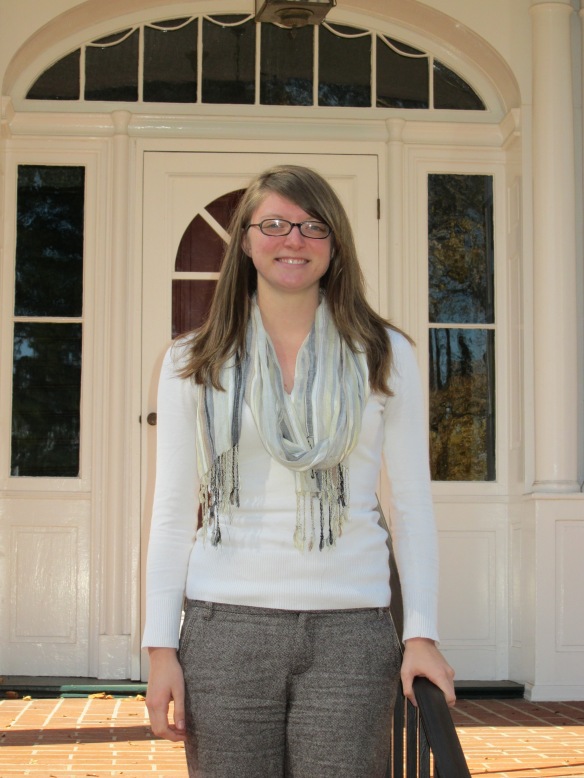 For the past two years, I have called Lewisburg home.  But all great things must come to an end.  Friday August 23rd marks my final day as an AmeriCorps member with the Greenbrier Historical Society.  I have been honored to work with a wonderful staff, passionate board members, and a dedicated group of volunteers.  I have discovered a new love of history and developed a real passion for museums.  I have greatly enjoyed working with the GHS collections, with my major project to inventory all the items on display in the museum and the boxed items housed in the collections storage room.  It has taken me months, but I enjoyed every minute of identifying the objects, researching their history, and understanding their importance in the Greenbrier Valley.

Living in Lewisburg and the Greenbrier Valley for over two years has been such a privilege.  I can’t think of another place as naturally beautiful or as rich with history.  I look forward to returning to Lewisburg in the future and knowing that I’ve been a part of a wonderful organization that strives to preserve and promote the history of such a remarkable place.

Covered wagons have long held an iconic place in the real and storied past of the
American frontier, and in the late 1700s, Lewisburg was the edge of the western frontier.  The main purpose of the wagon was not to transport people but to deliver raw materials from the countryside into the city and finished goods back to the frontier.  The Coffman family traveled between Lewisburg and Richmond, Philadelphia, and New York City for up to five months at a time.

This wagon is currently on display in the Wagon House on the North House lawn in Lewisburg.  The display was recently updated by our summer intern, Allyson Miller, and will teach visitors about this type of wagon, how it was restored, and why it’s so important to the Greenbrier Valley.

Unable to make it to Lewisburg to see the new display?  No worries!  The following images are included in the new display.  But make sure to check out the Wagon House the next time you’re in the area! 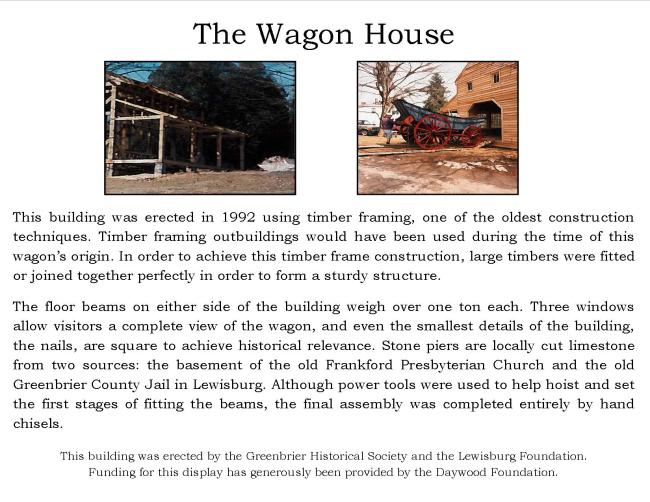 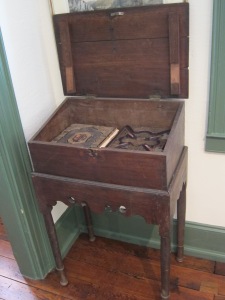 Item of the Week – August 16, 2013
Bibles were one of the most important objects a family would own, not only because of the significance of religion, but because they held family records about births, deaths, and marriages.  This box would have contained the family bible in order to protect it and served as a place to display it during special occasions.

These bibles were carried by soldiers during the American Civil War. They served not only as a reminder of the family left at home. Often soldier bibles functioned like dog tags – if a soldier was wounded or killed, his family could be located and contacted. These three bibles belonged to three local confederate soldiers: 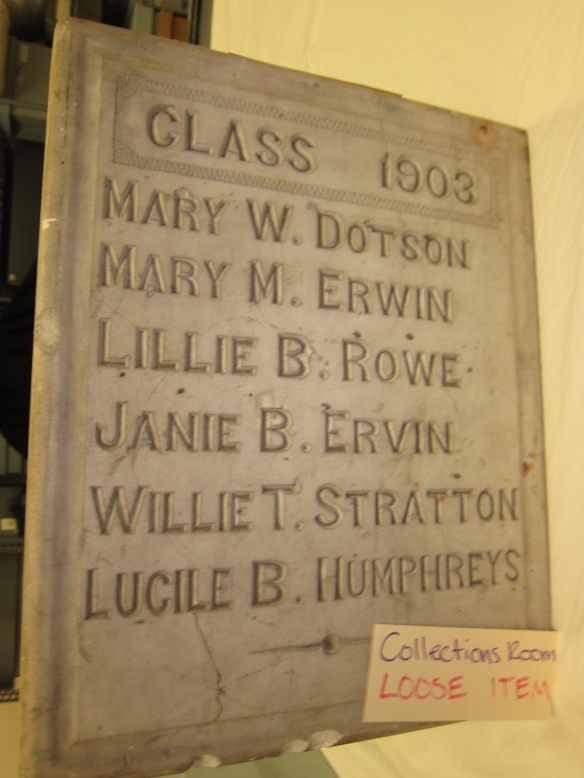 In 1903, this cornerstone was placed in the new building of the Lewisburg Female Institute by the entire graduating class, whose names appear on the stone. When the building burned in 1921, the stone was saved

In the 1970’s, as the news of a historical society began to spread throughout the Greenbrier Area, so did its popularity. The Greenbrier communities, having a new found eagerness to preserve history, began flooding to the historical society with stories and historical artifacts. Almost daily, GHS would receive valuable artifacts and precious documents pertaining to the Greenbrier Valley history. Excited as they were about these historical treasures, the society was soon overwhelmed, as space and resources were limited. Lacking a location of their own, GHS became concerned that it would hinder fulfillment of their mission to promote interest in history. Finding a house for the society was the top priority! 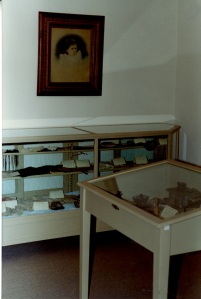 GHS searched several buildings over a span of several years within the Greenbrier Area but none seemed to fit just right. The home had to offer an environment that was safe, fireproof, and of decent size. The years continued to stretch on and the movement from a cinder-block building on Austin Street to the former Greenbrier Public Library caused wear on the artifacts and documents.

In 1974, 10 years after the start of the society, a home was finally within reach. Governor Arch Moore of West Virginia expressed his sincerest interest in working with GHS to find a headquarters. The “North House,” located in Lewisburg, had a rich history. For a long time, it was owned by the Greenbrier Women’s College and used as the President’s Home. When the college closed in 1972, the state of West Virginia took ownership. Governor Moore felt strongly that this house must be protected and gave it to the Greenbrier County Commission. With an agreement of one dollar per year, the GHS leased the historic North House from the Greenbrier County Commission in 1975. At last, the Greenbrier Historical Society could settle into a building that answered their every need.

Excitement for the North House swept throughout the Greenbrier community, but restoration was in need before the museum could ever open its doors to welcome the public. Money was tight and grants to restoration were hard to come by. For a brief time, it seemed as if the dream of having a home for the society might not be realized.

In 1976, with the support of the Greenbrier Valley communities, the North House was able to be restored. The City of Lewisburg took the restoration on as its Bicentennial Project, and additional money came from other supporters throughout the region. On July 4, 1976, GHS opened the doors to the long awaited museum, inviting the Greenbrier Valley community in to see the new exhibits and displays. The GHS archives found a new home on the second floor of the house, and people traveled from all across the county to see and learn of the histories that lay in these hills. The North House remained opened, greeting patrons every day, until the 1990s, when the growing organization, need for additional space, and the acquisition of the property brought changes to the North House.

As West Virginia celebrates its 150th birthday this year, it is interesting to look at the unique way in which we became a state on June 20, 1863. Although tensions over representation plagued western Virginia before the outbreak of the Civil War, wartime politics provided an opportunity for the formation of a new government.  At the time and in the years since, many questioned the constitutionality of the process and whether the new state should be dissolved once Virginia was restored to the Union.

Although Greenbrier County was not represented at the two Wheeling Conventions, there were those who were in favor of session from Virginia and many more who were not. Visitors will be given the opportunity to cast their vote on the constitutionality of West Virginia.

In conjunction with Born of the Rebellion, the Greenbrier Historical Society will continue to host their own mini-exhibit The Civil War in Greenbrier County which discusses the local impact of the Civil War and features artifacts used locally or owned by Greenbrier Valley soldiers.

The Greenbrier Historical Society, located at 301 West Washington Street, is open free of charge Monday – Saturday from 10am to 4pm. Donations are always welcome. For more information, contact 304.645.3398 or info@greenbrierhistorical.org. Or like us on Facebook!

Author and genealogist Greg Clendenin will be signing and selling his historical non-fiction novel “The Clendenin Massacre” at the Greenbrier Historical Society’s North House on Saturday July 13th from 11am to 3pm. The Clendenin family played a role in settling the Greenbrier and Kanawha valleys in the 18th century. On July 15, 1763, Archibald Clendenin Jr. was killed by Shawnee Chief Cornstalk, as were two of the Clendenin children. Others, including Ann Clendenin, were taken captive.

The author, a native of Charleston, is a descendent of Archibald Clendenin Sr. and the six-time great-grandson of Charles Clendenin, for whom the capital of West Virginia is named.

Beyond The North House Tour
Blog at WordPress.com.